It was an overcast day on the Cote d’Azur, but the clouds could not obscure the huge amount of wealth concentrated there.  We took the bus from Nice to Menton, almost on the Italian border, passing through one uber waterfront town after another.

Sure, we knew Monte Carlo would be high roller heaven, but we were suprised by all the other towns like Villefranche-Sur-Mer, St. Jean-Cap-Ferrat, and a host of others, which just oozed wealth.  Even Menton, at the end of the line, had a lovely waterfront setting, well worth the visit

The bus ride follows one of the corniches, the coastal roads that hug the cliffs between Nice and Monaco, each higher than the last, with spectacular views of the Med and the waterfront towns below.  The ride to Menton lasts about one and a half hours, takes you into almost 3 countries, and costs a grand total of one Euro.  What a deal

The next day we visited the Chagall Museum, a nice stroll across town from our hotel. On the way we met Angelo, a local guy who answered our burning question, Why are there so many Italian restaurants in Nice and more pizza joints than in Manhattan? Angelo told us that more than a quarter of the population is Italian, like he is, and that whenever someone loses his job, he opens up a pizza place.

The Chagall Museum was wonderful.  Belorussian painter Chagall escaped to the US during WWII, actually NYCity, then moved back to France where he could hang with both Matisse and Picasso.  This small museum was built solely to house Chagall’s series of Old Testament paintings.  Each painting has so much going on it’s best to get the audio guide for a fuller understanding

At dinner we met Carmelo, who had managed an Italian restaurant on Bedford st in Greenwich Village up until a year ago. I bet I had passed his place many times, but needed to be in Nice to meet him. 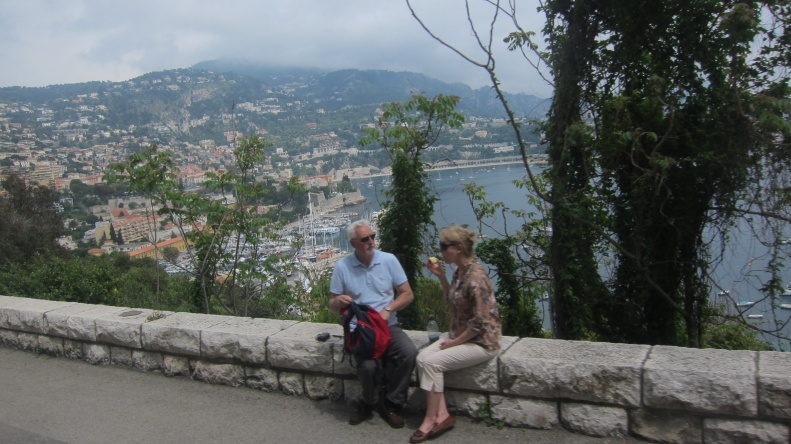 dirty little secret of this part of the French Riviera. – that’s no beach, more like a rock pile. LI beaches rule!

menton promenade, the poor sister in these parts , but still very nice.

Monte Carlo harbor. to put the size of these yachts in perspective, look at the guy washing one of the boats (good luck with that).

grand old hotel on the waterfront promenade in nice. 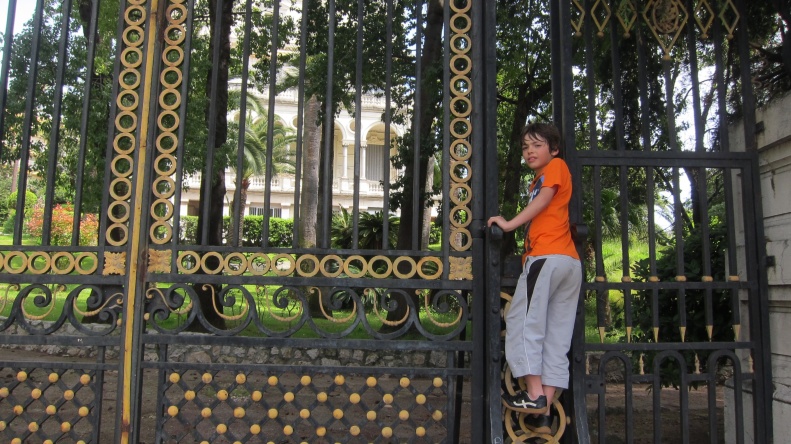 son of angelo. typical young boy, trying to go where he shouldn’t.. 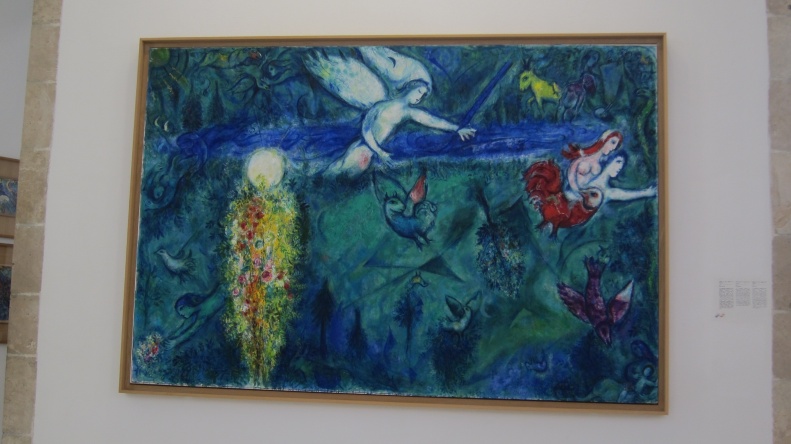 adam & eve get the boot from the garden of eden.

for chagall, eve is a redhead. it’s always a redhead !

Tomorrow is a travel day. We head to Provence, via Marseille, and look forward to a very different experience than the Cote d’Azure.